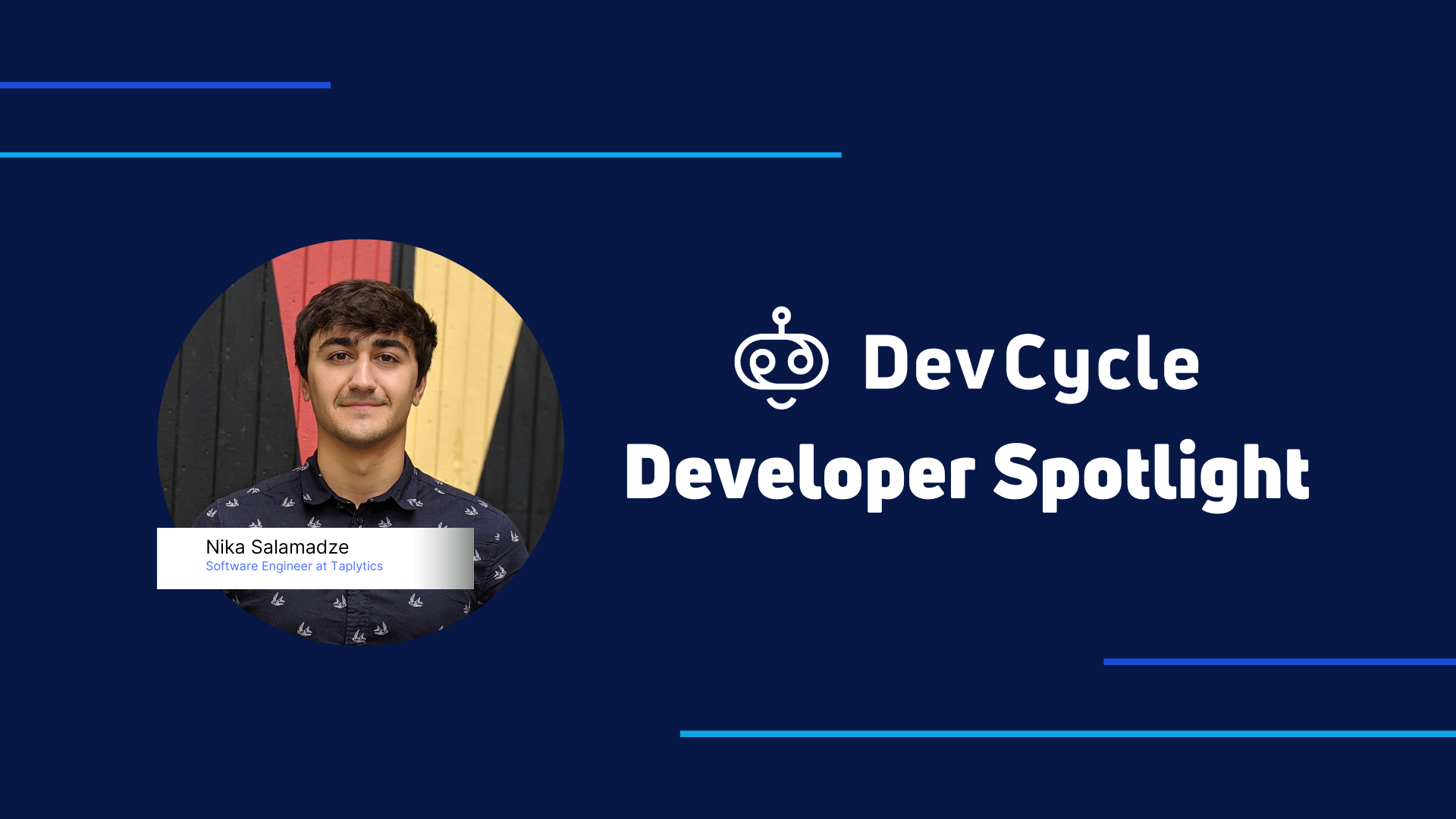 Q: Where did you go to school/what is your background in engineering?

A: I took my first course in programming in Grade 10, and knew I wanted to pursue a career in engineering from that point forward. I graduated from the University of Waterloo with a degree in Computer Engineering in April 2022. DevCycle is my first full time Engineering job, but I had multiple co-ops throughout university.

My first co-op was as an iOS developer for a startup called Marlena Books. After that, I was a Mobile Developer at an innovation hub for the Royal Canadian Air Force. My next co-op was as a Full Stack Developer for another start up called CharityCAN. I was then a Full Stack Engineer Intern for Harled, Inc, and lastly a Software Developer Intern for D2L before landing my full time role with DevCycle & Taplytics.

Q: What’s your favourite thing you’ve ever built or worked on as an engineer?

A: During my co-op with the innovation hub for the Air Force, I worked on a product that started out very small, and eventually had a ton of impact and reach. It was a flight planning product that was initially meant to be used by a few squadrons in one of the wings of the Air Force, but then it became mandated and is now being used by nearly all of the Air Force.

It was really cool to know that I was working on something so impactful as an intern – that doesn’t always happen in internships/co-ops!

Q: What is one tool in your current stack that you could not live without?

A: DevCycle! Primarily because it allows me to release code with confidence. It gives me peace of mind knowing that I can disable entire code paths in production (without having to deploy a new build) in case there's a bug, a security vulnerability, or if users just don’t like a feature.

Q: Which programming language are you most familiar with, and which do you prefer?

A: I work mostly with Javascript and Typescript, so that’s what I’m most familiar with right now. During my earlier programming days (back when I thought I was going to be a game developer) I probably would’ve said C++.

Q: If you could give any engineering related advice to your younger self, what would it be?

A: Don’t overthink it! Not every line of code you write will be perfect, so try to find a balance between being efficient and writing clean, easy to maintain, scalable software.

Q: Where do you go to stay up-to-date on all things engineering?

A: Social media, primarily Twitter and TikTok! TikTok is quickly becoming a resource hub for developers. One account that I’ve found particularly useful is Steve from Builder.io. @steve8708

Q: What’s your least favourite thing about being an engineer?

A: There isn’t much I don’t like about being a developer, but if I had to pick something I’d say that it can get exhausting sitting in front of a computer for long periods of time. Especially when working remotely, since you’re by yourself and it’s easy to get caught up in a task and forget to take breaks.

Q: What’s your favourite part about your job/being an engineer?

A: Being able to actively solve problems is the most fun thing about it for me. We’re always facing new and interesting challenges in this role, so there is always something to motivate you to learn more and get better.

Q: What’s your coffee order, and where’s the best place to get that coffee from?

A: I mainly drink coffee for energy (I don’t really enjoy the taste of it) so my order is usually just a regular black coffee.

Q: What's your favourite music type or band, and where do you listen to your music?

I use Spotify for all of my music. If I’m at the gym, I’ll listen to Rock, Punk, Alt. But when I’m working, I’ll listen to something that’s more low-key like HipHop, Pop, Folk, or Country. I don’t really stick to one genre–my music taste varies depending on what I’m doing.

DevCycle is the leading feature management platform trusted by companies of all sizes to improve their software development process and ship features faster with confidence. DevCycle offers feature flags, A/B testing, and integrations with popular development tools like GitHub, Jira, and Slack. Sign up for your free DevCycle account today.

Want to be featured in our next Developer Spotlight? Fill out this form!